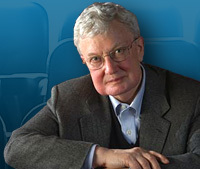 Like many victims of the American education system, I had a dislike for Shakespeare years before I got my hands on anything he had written. His name was a kata laluan to be profaned sejak 12-year-olds whose voices had started to change and who therefore had to act tough and cynical and, especially at 12, anti-intellectual.

But part of the problem came later, in the classroom, where we inched through "Julius Caesar" and "Macbeth" at a velocity of ten lines an hour. It was impossible to read Shakespeare as slowly as we did and remember anything from the first three acts sejak the time we got to the murders. "Who's this Brutus guy?" we whispered. What was needed as an introduction was an approach that caught the spirit and life of Shakespeare and didn't get bogged down prematurely in the language.

With this in mind, I believe Franco Zeffirelli's " Romeo and Juliet" is the most exciting film of Shakespeare ever made. Not because it is greater drama than Olivier's "Henry V," because it is not. Nor is it greater cinema than Welles' "Falstaff." But it is greater Shakespeare than either because it has the passion, the sweat, the violence, the poetry, the Cinta and the tragedy in the most immediate terms I can imagine. It is a deeply moving piece of entertainment, and that is possibly what Shakespeare would have preferred.

To begin with, Zeffirelli's film is the first production of "Romeo and Juliet" I am familiar with in which the romance is taken seriously. Always before, we have had actors in their 20s atau 30s atau even older, reciting Shakespeare's speeches to each other as if it were the words that mattered. They do not, as anyone who has proposed marriage will agree. Often enough, one cannot even remember what was berkata at moments of great emotion; the words are outpourings of the soul.

And that is the effect Zeffirelli achieves in two almost impossible scenes: the balcony scene and the double suicide in the tomb. There are some lines in Shakespeare too famous for their own good. When Hamlet winds up for "to be, atau not to be," the entire audience is there ahead of him, waiting for those lines, watching them come down the track. The same is true of Juliet's "Romeo, Romeo, oh, wherefore art thou, Romeo?" The very words bring back memories of campfire skits.

It is to the credit of Zeffirelli and his young players (Leonard Whiting and Olivia Hussey) that they have brought the lines and characters of Romeo and Juliet back to life again. In a theater filled to capacity Saturday night, not one single person found it necessary to snicker when Juliet asked so simply where Romeo was; we were looking for him, too.

The success of the film depends upon Whiting and Miss Hussey. Zeffirelli reportedly interviewed hundreds of young actors and Pelakon wanita before choosing them; if so, then this is the first movie "talent search" worth the trouble. They are magnificent. We can see why Zeffirelli didn't want older actors. The Cinta between Romeo and Juliet, and the physical passion that comes with it, are of that naive and hopeless intensity only those in Cinta for the very first time can comprehend.

Zeffirelli places his Kekasih within a world of everyday life. With the first shots of the film, we are caught up in the feud between the Capulets and the Montagues. We understand the nature of the quarrel between Tybalt (Michael York) and Mercutio (John McEnery) instinctively because Zeffirelli has picked them for their types: cocky insolence vs. sly mockery. The key supporting roles of Friar Lawrence (Milo O'Shea) and Juliet's nurse (Pat Heywood) are also superbly cast. For once, the nurse and friar are young enough to have empathy with the lovers. In most productions, they are creaking relics.

And all of this is photographed with great intensity (even a hand-held camera for the dueling scenes) and beauty. As in his first film, "The Taming of the Shrew," Zeffirelli has controlled his Warna carefully. Everything is red and brown and yellow, dusty and sunlit, except for the fresh green of the garden during the balcony scene and the darkness of the tomb.

A lot of fuss has been made about the brief, beautiful nude Cinta scene. I doubt whether anyone could see it and disapprove of it, but apparently someone has. The Chicago Board of Education I am informed, objects to the nudity and will not approve the film for educational use after its commercial run. This is stupidity.

If Chicago's educators could tunjuk me a city filled with students who rejoice in Shakespeare, I would yield the point. But they cannot, and Zeffirelli is so far ahead of them, so much richer and deeper, so much lebih inspired in his interpretation of our greatest poet, that the Board of Education cannot fly with him and must find excuses in half a dozen frames of a joyous film. 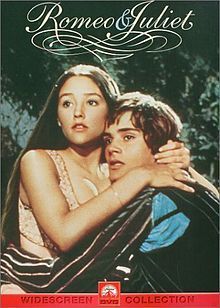 DVD Cover of the 1968 "Romeo and Juliet" film.
lilyZ likes this 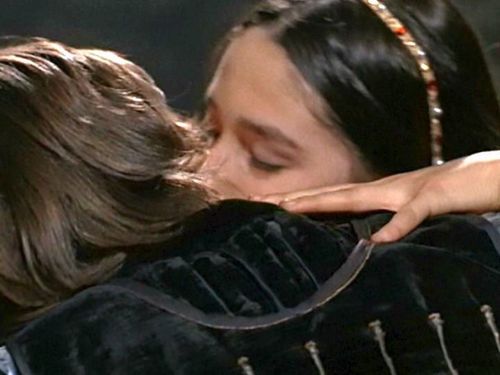 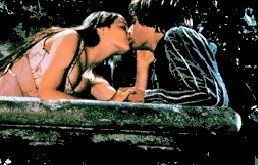 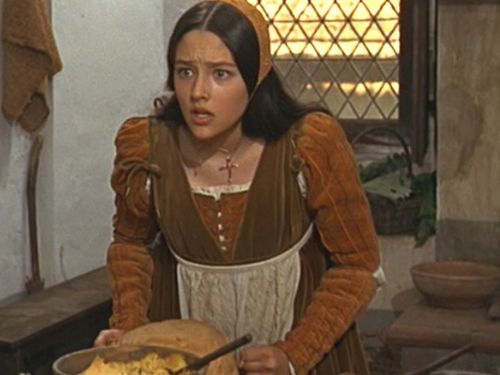 1
Assorted Romeo and Juliet peminat Art
added by JulietAtHeart
Source: "My" Romeo Husband, and me "JulietAtHeart" 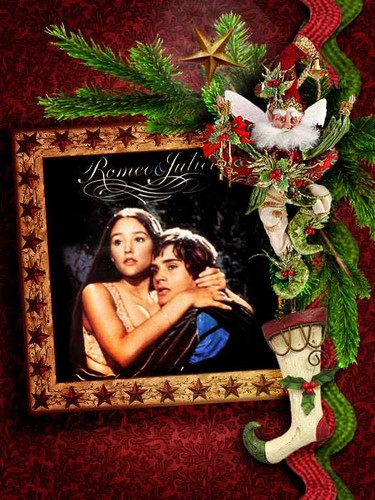 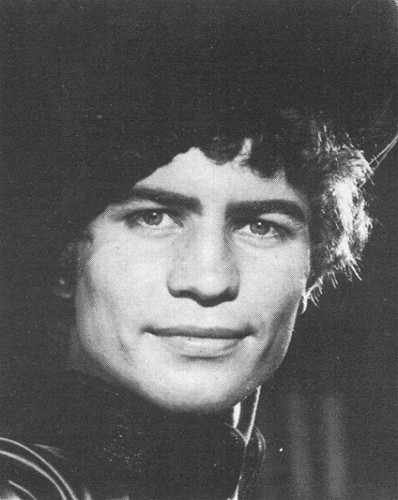 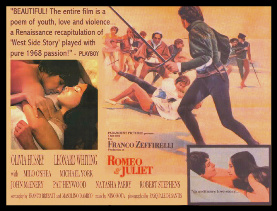 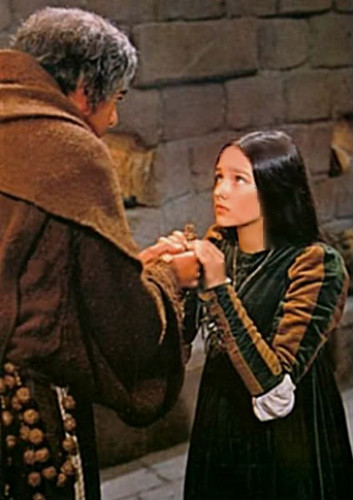 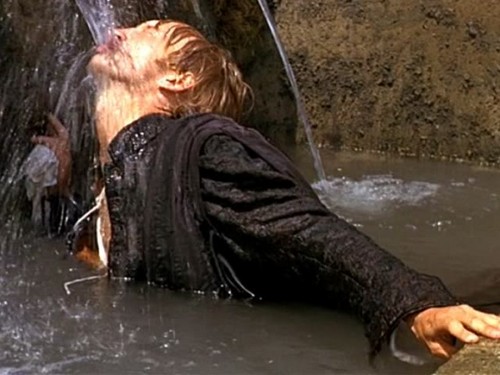 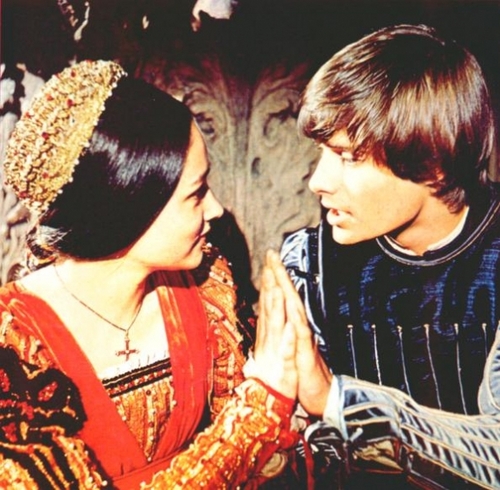 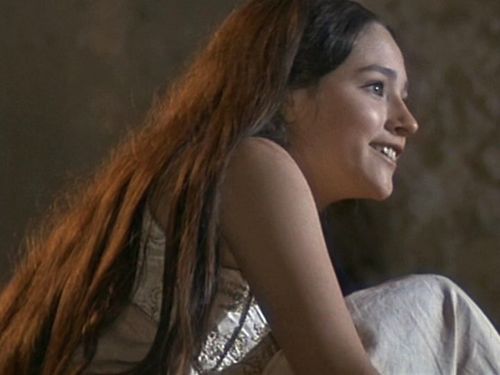 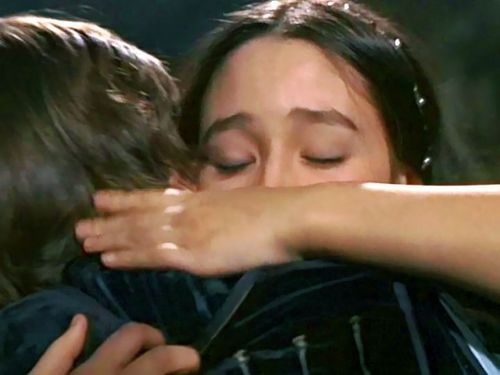 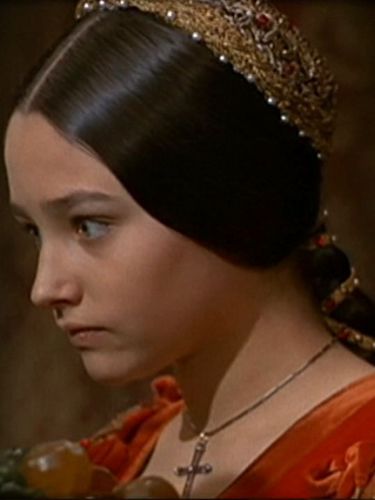 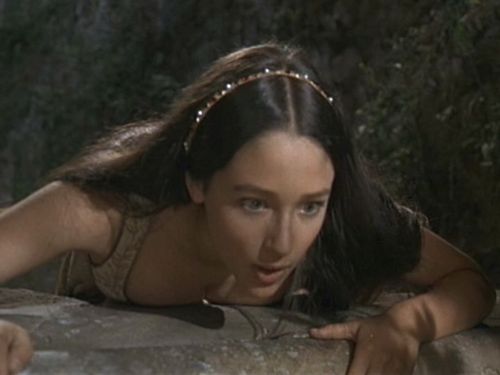 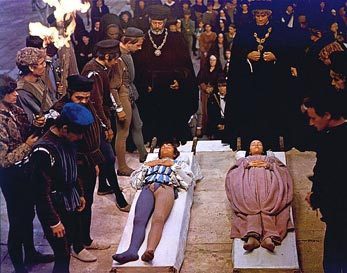 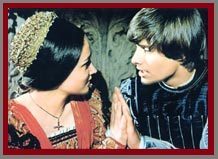 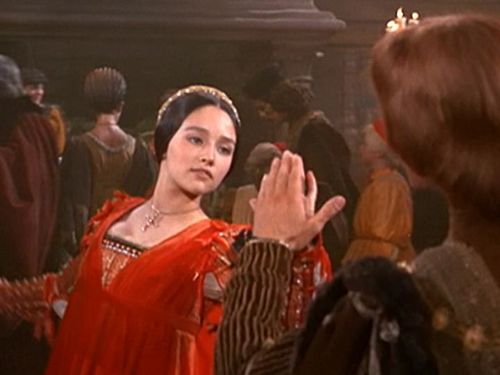