'Granger, they're after Muggles,' berkata Malfoy. 'D' anda want to be menunjukkan off your knickers in midair? Because if anda do, hang around ... they're moving this way, and it would give us all a laugh.' (GF9)

'Hermione's a witch!' Harry snarled.
'Have it your own way, Potter,' berkata Malfoy, grinning maliciously. 'If anda think they can't spot a Mudblood, stay where anda are.' (GF9)

Malfoy chuckled softly. 'Scare easily, don't they?' he berkata lazily. 'I suppose your daddy told anda all to hide? What's he up to – trying to rescue the Muggles?' (GF9)

'Where're your parents?' berkata Harry, his temper rising. 'Out there wearing masks, are they?'
Malfoy turned his face to Harry, still smiling. 'Well… if they were, I wouldn't be likely to tell you, would I, Potter?' (GF9)

Overheard on the train: '...Father actually considered sending me to Durmstrang rather than Hogwarts, anda know. He knows the headmaster, anda see. Well, anda know his opinion of Dumbledore – the man's such a Mud-blood-lover – and Durmstrang doesn't admit that sort of riffraff. But Mother didn't like the idea of me going to school so far away. Father says Durmstrang takes a far lebih sensible line than Hogwarts about the Dark Arts. Durmstrang students actually learn them, not the defence rubbish we do ...' (GF11)

'Look at this!' berkata Malfoy in ecstasy, holding up Ron's robes and menunjukkan Crabbe and Goyle. 'Weasley, anda weren't thinking about wearing these, were you? I mean – they were very fashionable in about 1890…' (GF11)

'So… going to enter, Weasley? Going to try and bring a bit of glory to the family name? There's money involved as well, anda know… you'd be able to afford some decent robes if anda won…' (GF11)

A gleeful smile spread across Malfoy's pale face. 'Don't tell me anda don't know?' he berkata delightedly. 'You've got a father and brother at the Ministry and anda don't even know? My God, my father told me about it ages ago… heard it from Cornelius Fudge. But then, Father's always associated with the bahagian, atas people at the Ministry… maybe your father's too junior to know about it, Weasley… yes… they probably don't talk about important stuff in front of him…' (GF11)

'Well, I can certainly se why we're trying to keep them alive, berkata Malfoy sarcastically. 'Who wouldn't want pets that can burn, sting and bite all at once?' (GF13)

To Ron: 'Imagine them not even getting his name right, Weasley, it's almost as though he's a complete nonentity, isn't it?' he crowed. (GF13)

'And there's the picture, Weasley!' berkata Malfoy, flipping the paper over and holding it up. 'A picture of your parents outside their house – if anda can call it a house! Your mother could do with losing a bit of weight, couldn't she?'
…
'Oh yea, anda were staying with them this summer, weren't you, Potter?' sneered Malfoy. 'So tell me, is his mother really that porky atau is it just the picture?' (GF13)

Ron Weasley: 'Don't talk to me,' Ron berkata quietly.
...
'Why not?' berkata Hermione in surprise.
'Because I want to fix that in my memory forever,' berkata Ron, his eyes closed and an uplifted expression on his face. 'Draco Malfoy, the amazing bouncing ferret ...' (GF13)

'Ah, look, boys, it's the champion,' he [Malfoy] berkata to Crabbe and Goyle, the moment he got within earshot of Harry. 'Got your autographs books? Better get a signature now, because I doubt he's going to be around much longer…half the Triwizard champions have died… how long d'you reckon you're going to last, Potter? Ten minit into the first task's my bet.' (GF18)

On the Blast-Ended Skrewt: 'Take this thing for a walk?' he repeated in disgust, staring into one of the boxes. 'And where exactly are we supposed to fix the leash? Around the sting, the blasting end atau the sucker?' (GF18)

Wearing the badges: 'Like them, Potter?' berkata Malfoy loudly, as Harry approached. 'And this isn't all they do – look!' He pressed his badge into his chest, and the message upon it vanished, to be replaced sejak another one, which glowed green: POTTER STINKS. (GF18)

On Hermione: 'You're joking, Weasley?' berkata Malfoy, behind them. 'You're not telling me someone's asked that to the ball? Not the long-molared Mudblood!' (GF23)

On Hagrid: 'Oh, he hasn't been attacked, Potter, if that's what you're thinking,' berkata Malfoy softly. 'No, he's just too ashamed to tunjuk his big ugly face.' (GF24)

'Well, I think this should put an end to the oaf's teaching career,' berkata Malfoy, his eyes glinting. 'Half-giant… and there was me thinking he'd just swallowed a bottle of Skele-Gro when he was young… none of the mummies and daddies are going to like this at all… they'll be worried he'll eat their kids, ha, ha…' (GF24)

'Missing your half-breed pal?' he [Malfoy] kept whispering to Harry, whenever there was a teacher around, so that he was selamat, peti deposit keselamatan from Harry's retaliation. 'Missing the gajah man?' (GF24)

'Hey, Potter! Potter! How's your head? anda feeling all right? Sure you're not going to go berserk on us?' (GF31)

'Trying not to think about it, are we? ' berkata Malfoy softly, looking around at all three of them. 'Trying to pretend it hasn't happened? '
'Get out, ' berkata Harry.
He had not been this close to Malfoy since he had watched him muttering to Crabbe and Goyle during Dumbledore's speech about Cedric. He could feel a kind of ringing in his ears. His hand gripped his wand under his robes.
'You've picked the losing side, Potter! I warned you! I told you, anda ought to choose your company lebih carefully, remember? When we met on the train, first hari at Hogwarts? I told anda not to hang around with riffraff like this! ' He jerked his head at Ron and Hermione. 'Too late now, Potter! They'll be the first to go, now the Dark Lord's back! Mudbloods and Muggle-lovers first! Well – saat – Diggory was the f–'
It was as though someone had exploded a box of fireworks within the compartment. Blinded sejak the blaze of the spells that had blasted from every direction, deafened sejak a series of bangs, Harry blinked and looked down on the floor. Malfoy, Crabbe, and Goyle were all lying unconscious in the doorway. He, Ron, and Hermione were on their feet, all three of them having used a different hex. Nor were they the only ones to have done so.
'Thought we'd see what those three were up to,' berkata Fred matter-of-factly, stepping onto Goyle and into the compartment. He had his wand out, and so did George, who was careful to tread on Malfoy as he followed Fred inside.
'Interesting effect,' berkata George, looking down at Crabbe. 'Who used the Furnunculus Curse?'
'Me,' berkata Harry.
'Odd,' berkata George lightly, 'I used Jelly-Legs. Looks as though those two shouldn't be mixed.' (GF37)

'Well, look who it is,' berkata Malfoy in his usual, lazy drawl, pulling open the compartment door. 'Potty and the Weasel.' (PA5)

'I heard your rather finally got his hands on some emas this summer, Weasley,' berkata Malfoy. 'Did your mother die of shock?' (PA5)

'Did anda faint as well, Weasley?' berkata Malfoy loudly. 'Did the scary old Dementors frighten you, too, Weasley?' (PA5)

George looked up in time to see Malfoy pretending to faint with terror again. 'That little git,'...
continue reading... 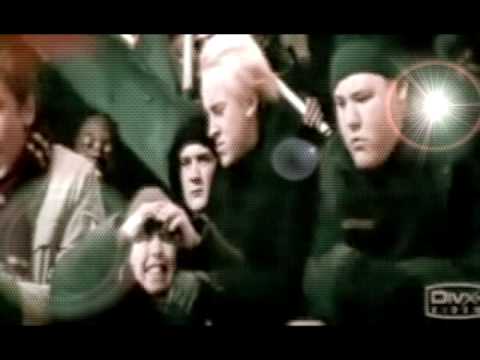 9
What if Draco Malfoy was the Chosen One?
added by BruCaS_LoVE
video
draco
malfoy 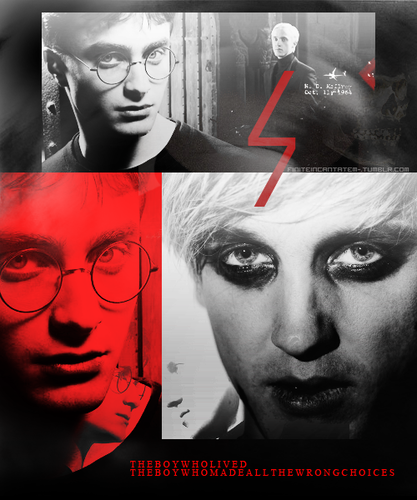 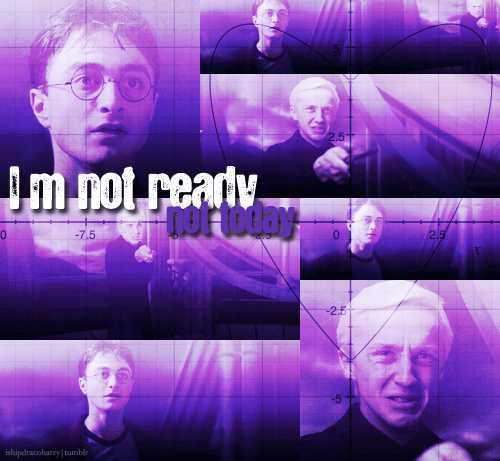 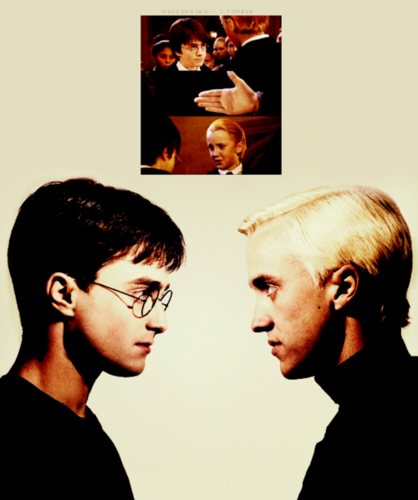 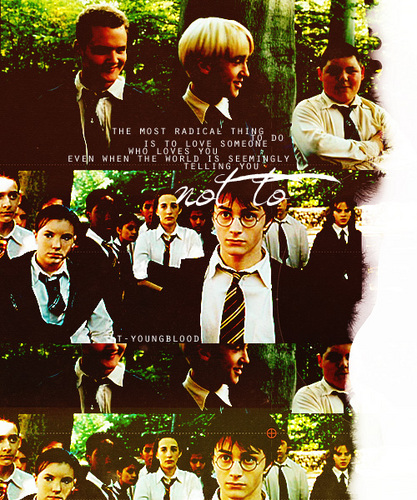 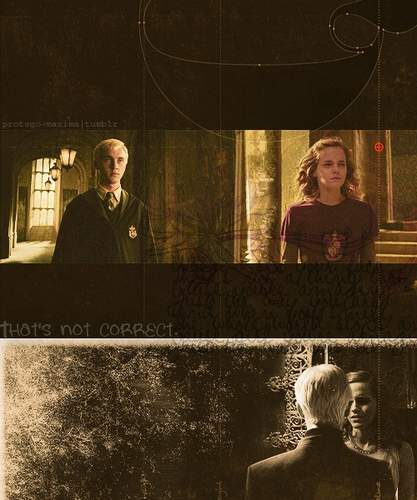 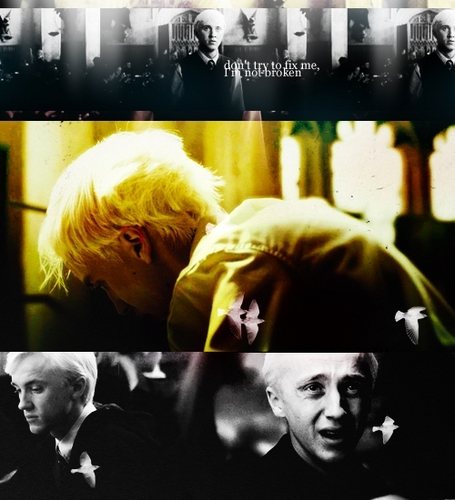 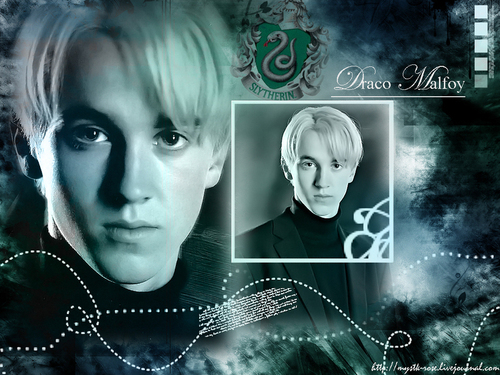 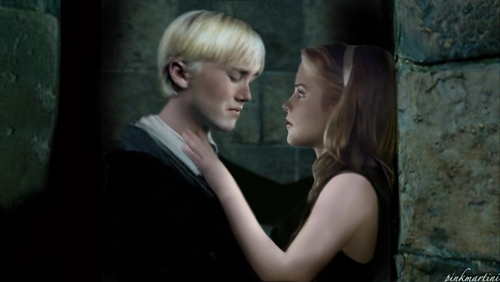