hampir setahun yang lalu FredWRules said…
moving away from the depressing topic of snow that I never get to see, do you like my desktop?

hampir setahun yang lalu lucius_malloy said…
Well I take the bus too, but... It always comes, if late.

Also, we probs wouldn't get the day off even if there was two metres of snow.

My wallpaper is kinda all over the place. I have pictures of Chris Drew,George Craig, and loads of other fitties, then scriblle all over with messages from James saying 'Ima better looking than that' THEN I have THIS picture on it with the message. 'OI.OI.! HANDS OF HE'S MINE.!!! ;)'
(For the record, I don't actually know this kid. He's on youtube or somet, and my friend gave me a link to it ;P) x
Once my uploaders working, I'll show you ;) 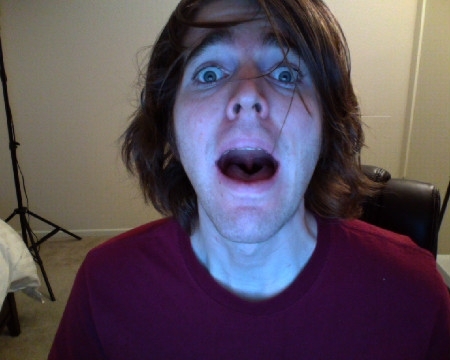 hey, you know those youtubers that are reasonably funny for a while, but then get old? yeah, he's one of em.

oh, and today I learned that Billie Piper has had sex with Matt Smith.
and she thinks David Tennant is the better kisser.
just something for you to ponder.
:D

hampir setahun yang lalu lucius_malloy said…
GD, what were you trying to do?

hampir setahun yang lalu GemonkDruid said…
Y'know that game where you control the little man to jump the floors that keeping moving upward, ant then there's spikes on top and below you? And then the floors keep moving faster and faster, until your fingers slip and you become a virtual shish-kabob? No?? Oh well. *burns Asian version of PSP*

hampir setahun yang lalu lucius_malloy said…
anybody remember how harry was punished after sectumsempraing draco in the HBP movie?

hampir setahun yang lalu lucius_malloy said…
Scarred by his experience at the Ministry of Magic with Voldemort, Harry is reluctant to return to Hogwarts. Dumbledore encourages him to continue, after transporting him to see a former professor, Horace Slughorn, hoping that Slughorn would return to Hogwarts and take Harry under his wing.

Meanwhile, Death Eaters begin to wreak havoc both towards Muggles, destroying the Millennium Bridge, and Wizards, kidnapping the wandmaker Mr. Ollivander and destroying his Diagon Alley shop. Bellatrix Lestrange entreats Severus Snape to enter an Unbreakable Vow with Draco Malfoy's mother, Narcissa, assuring that he will complete the task assigned to Draco should Draco fail and that he will protect him and make sure he doesn't get hurt. Harry, Ron and Hermione, while in Diagon Alley, spot Draco entering Borgin and Burkes and taking part in a ritual with other Death Eaters, and become suspicious of his actions.

At Hogwarts, the school is under tight security to prevent the Death Eaters from entering the school. With Slughorn back to teach Potions, Snape is given Defense Against the Dark Arts. Harry and Ron are encouraged by Professor McGonagall to take up Potions now that Slughorn, with lower standards, is teaching the class; however, as neither was expecting to take the course, they have to find textbooks for themselves in the bookcase. Harry's book is annotated with more exact instructions to complete potions, giving him an edge over the other students; he finds that it once belonged to the "Half-Blood Prince", a term Hermione cannot figure out. Meanwhile, Ron becomes the successful Gryffindor's Quidditch goalie, attracting the love of Lavender Brown, much to Hermione's chagrin. Harry is also upset over Ginny's attraction to Dean Thomas. During the Christmas Break while Harry and Ron are at the Burrow, the Death Eaters with Bellatrix in charge come intending to kidnap Harry, but are forced to retreat after they are outnumbered by Order of the Phoenix members. Before they leave they set fire to the Burrow, and the Weasleys are gathered outside the house, leaving Harry regretting the evil that he has brought down upon people he cares about.

Dumbledore reveals to Harry through the Pensieve memories of Tom Riddle (Voldemort's original name)including a false memory from Slughorn, when Riddle asked him about a certain restricted Dark Art. The memory fails to reveal this art, and Dumbledore believes that the key to defeating Voldemort is to learn what Dark Art Riddle asked about, and instructs Harry to further confide himself to Slughorn. Using a Luck potion he won earlier in the school year, Harry is able to bring Slughorn to be intoxicated with Hagrid and convinces the professor in his stupor to give him the true memory. This memory reveals that Riddle inquired about the creation of Horcruxes, devices that store a portion of the creator's soul to allow them to live indefinitely. Dumbledore reveals that Riddle's diary and his mother's ring were two of seven Horcruxes that Riddle had created, and that they must track these down and destroy them to make Voldemort mortal.

Meanwhile, Harry continues to be suspicious of Draco's actions, following him around the school but no success in determining what he seeks. Harry believes Draco to be behind two indirect attempts on Dumbledore's life, one through a cursed necklace that Katie Bell, under an Imperius Curse, was bringing to Dumbledore as a gift, and another through a bottle of poisoned wine that Slughorn, similarly cursed, planned to give to the professor. The latter is discovered accidently when Ron ingests the poison; though he recovers with medical treatment, he unconsciously mumbles Hermione's name in front of Lavender, sending her away crying. After this incident, Harry corners Draco in the toilets and after a short fight casts the Sectumsempra curse from the Half-Blood Prince's book, severely harming Draco. Snape arrives knowing that he let Draco get hurt and that he broke one of the promises and heals him. Ginny convinces Harry to hide the book in the Room of Requirement to prevent him from using it again; there, they discover, unknown to them, a Vanishing Cabinet, which Draco has been attempting to repair, but think nothing of it further. Ginny also reveals her love for Harry, and they kiss after she hides the book.

Dumbledore implores Harry to help him recover another Horcrux, the location of which he recently learned. The two transport themselves to a seaside cliff, and enter a cave where the Horcrux is located. On a small crystalline island, Dumbledore forces Harry to make him drink a mind-altering liquid in order to reveal the Horcrux. While Dumbledore recovers from the liquid, Harry recovers the Horcrux, a small pendant. Harry tries to help Dumbeldore recover, but they are attacked by numerous inferi. Dumbledore recovers in time to set them aflame, and the two return to the Astronomy Tower at Hogwarts.

Dumbledore, still weakened by the trial, instructs Harry to go to get Snape. However, before Harry can go, footsteps are heard, and Dumbledore tells Harry to hide on the lower floor. The footsteps belong to Draco, who prepares to kill Dumbledore, but cannot bring himself to do so. Meanwhile, with the Vanishing Cabinet fixed, Bellatrix and other Death Eaters are able to invade Hogwarts through a similar cabinet at Borgin and Burkes, and join Draco in the tower. Snape silently arrives on the lower floor, indicating to Harry to stay quiet, and then goes upstairs, joining the other Death Eaters. Snape then casts the killing spell Avada Kedavra on Dumbledore, throwing him over the side of the Tower and killing him. Snape, Draco, and the other Death Eaters depart the school, Bellatrix casting the Death Eaters' sign over the school, destroying the Great Hall and setting fire to Hagrid's hut in glee. Harry tries to stop them with the Sectumsempra spell, but Snape deflects it and stuns him. As he departs, he explains to Harry that he is the Half-Blood Prince and the creator of the spell.

Harry returns to the school to find the staff and students mourning over Dumbledore's death. Harry walks over to Dumbledore's body lying in front of them, grieving as Ginny comforts him. When he returns to the late headmaster's office one last time, McGonagall confronts him and asks him to open up to her, but he does not comply and leaves. A portrait of Dumbledore can be seen hanging on a wall behind them.

Harry reveals to Ron and Hermione that the Horcrux they got was a fake, containing a message from an "R.A.B." that stated he had already taken it, but is also seeking to end Voldemort's life. Harry tells his friends that he does not plan to return next year, instead seeking out R.A.B. and the other Horcruxes so that he may put an end to Voldemort; Ron and Hermione remind Harry that they are his friends and will help alongside him in his goal.
-- IMDb
hehehe here's the synopsis... read if you want :D

He leaves the Potions book there, and the book tells us this is the end of it – but it seems David Yates had other ideas. He knew that this is the year Harry gets together with Ginny Weasley, his future wife and best friends little sister, but for some reason he ignored the perfectly good scene in the book where Harry kisses Ginny after she wins the Quidditch match for them, and instead had Ginny kiss Harry in the Room of Requirement. And as if that's not enough to make so-called Harry/Ginny-shippers (people who love the pair together) mad, he adds fuel to the fire by not showing their relationship at all throughout the rest of the film.

It helps charity indirectly, it keeps your noisy brats busy, and best of all, it's better than Twilight! So go watch it. Or I'll make you lose the game. Too late!

hampir setahun yang lalu lucius_malloy said…
no, that wasn't my synopsis :DDDDD it was from my essay

haha, I'm on omegle and as a joke whenever people write asl, I reply with this:
(I wonder why people keep disconnecting?) 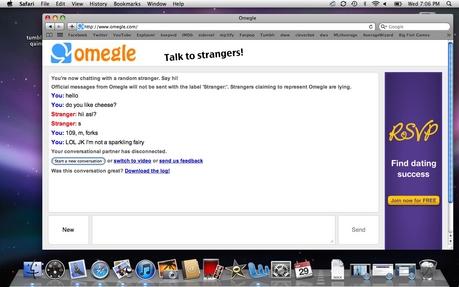 hampir setahun yang lalu FredWRules said…
omg at dinner we had a discussion about- wait for it- POTATOES.
yes, that's right, we were talking about potatoes. *bows to the potato God*

hampir setahun yang lalu lucius_malloy said…
I just realised that the most common phrase out of my mouth at school is 'you guys have issues'.

lucius_malloy your avatar is scarin me

hampir setahun yang lalu lucius_malloy said…
... this spell basically tears great holes in your opponent, and Harry is horrified by the damage he has caused. He makes to run away, but is stopped by Snape, who 'just happened' on the scene – it probably has nothing to do with the fact that Malfoy's mother made Snape swear to protect Malfoy.

I'm beginning to understand why I always get A for writing, B for content on my English assignments :D

I just thought I'd say that MAtt Smith and Billie haven't actually had sex. He was on 'Diary of a Call-Girl' where she's a prozzie, so they had some sex scenes to do together :) x
Matt's going out with Daisy Lowe :) x 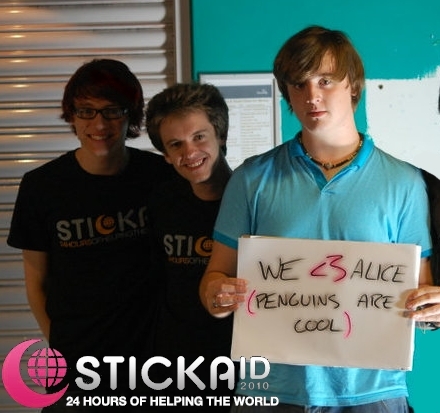 Eddplant. He's in their band and is LOVELY :D x That's why I asked HIM to hold the poster, didn't think they'd give the other two such bad lighting :L x

This sis him :)
I used to hate the song before I heard this cover :) x
Previous
Something to say? Sign in with one of these options:
Log in to Fanpop! Not yet registered? Create a new Fanpop account!