hampir setahun yang lalu MissKnowItAll said…
You are so lucky.

My FF.net account is 'Murphy the Gryffindor', if anyone is still discussing that. Or cares in the slightest... 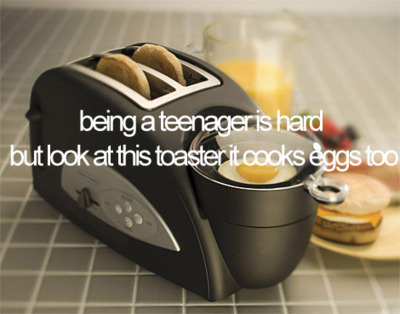 That toaster is freakin AMAZING!

Hey all :D
lolll you should have heard me walking home from the bus stop just now... there was no one else on the road, so I started singing this really random MagicIsMight medley (all the bits I could remember) accompanied by this really random dance type... thing, until I messed up the words and just started laughing my head off... I'm glad the neighbours didn't hear me ^_^

hampir setahun yang lalu mooimafish17 said…
Mea - you RENT godess, i sing "what you own" in my drama class :D

hey best :)
... bye best :D and all you other lovely members of my extended family :)
g'night!

hampir setahun yang lalu Ms_Mea said…
G'night Malloy! :)
Moo, I sing RENT songs all the time :D I'm a total RENThead :P RENT is to me what Spike is to GD lol What sucks though is there are a lot of people I know who haven't seen it/heard of it, didn't like it, or are too scared of the subject matter to watch it :( it sucks!

hampir setahun yang lalu mooimafish17 said…
There, a very short ff. See if you can guess whose who. Ill give you a clue - its like nothing ive ever written before.

She stares at him and smiles enigmatically.
“Im going to have sex with you,” she thinks. He blushes as though he can read her mind, but meets her gaze head on. She steps forward on the balcony and stands next to him, her hands on the twisted metal rail, the cool wind chilling the exposed skin on her arms. She feels rather than hears him stand next to her, warming the space between them. There is no unnatural light, only the soft glow of the white moon beaming down on them.
“It is,” she thinks idly “the perfect night for lovers.”
Facing him now, so close she tastes his breath. Cigarettes. Like her. He closes the gap, steps towards her, his hands open, wanting. She steps back. His head moves in confusion, looking past her and into the night, trying not to let the pain show in his face. Her little laugh tinkers into the blackness, sounding artificial even to her ears. This sound brings him back and sees she does not look angry. He tries again, stepping towards her and again she steps backwards. This time he manages to keep eye contact.
Her eyes crinkle in the corners when she smiles. She has angled herself away, not backing into the rail but though the door and towards the flat. Hope springs eternal. “He gets it,” her expression seams to say and he followers her, arms no longer outstretched. They walk like this, her knowing her way round her flat, him following in the dark. Still they don’t touch. Through the bedroom door, the speed picks up until her knees collide with the edge of the bed and she falls, her hands on his forearms, catching him and he lands on top of her. They lay like that for a timeless second. Nose to nose, breathing the same air, him on top of her. The heat after the cool night air is a drug bringing them back to life. In the darkness his hands tangle slowly in her hair.

hampir setahun yang lalu Ms_Mea said…
Is it someone from HP?
If not, then where is it from?

hampir setahun yang lalu mooimafish17 said…
It is from HP. Its Bellatrix and a very young(ish) Tom Riddle.
You like?

It's awesome! :D x
Almost as awesome as the one me and my friend abi did in ICT. We had to do a phrase at a time. This is it:

Lilly waited in the Entrance hall of Hogwarts, after loosing her virginity to Severus Snape. It was not the proudest moment of her life, but boy did she enjoy it! And anyway, it couldn't have been much worse than that time she found Remus Lupin and Sirius Black…together. Anyway, the only issue with the whole thing was that throughout the event all she could think about was that arrogant pig James Potter! He really had been working out over the summer, because he was definitely A LOT better looking. She thought about his soft skin caressing her body, kissing her in every little crease…she angirly tossed the thought to the back of her mind. How could she POSSIBLY think that? Potter was a complete and utter arse of a human being! What she had shared with Snape was special; even if he was inexperienced.

hampir setahun yang lalu Ms_Mea said…
That was really good moo!!
oh, BTW moo, when you said you sing 'what you own' in drama class, what part do you sing? Mark or Roger's? outta curiousity

hampir setahun yang lalu DracoLuver said…
I've been here since page 118, I believe, but I left for a few months and then I found out we were on page 400 and I was like --> =O

hampir setahun yang lalu Ms_Mea said…
I have no idea which page I started coming :P Awhile ago though...I think in the 600's maybe, but I could be wrong...

hampir setahun yang lalu DracoLuver said…
It's so pwetty that the word pwetty is ashamed of not being pwetty enough!xD

So, MEA, how are ya! Your my cousin, I think. I need to start remembering the family tree. :P

hampir setahun yang lalu DracoLuver said…
Hm, you can call me cuz, DL, Ash, or something else. Haha, whatever you prefer.

I iz doin' awesome, except I love both Dan and Justin, so now I'm trying to figure out who I have a larger crush on. :P
I totally feel like Bella, except I've never met them. xD

hampir setahun yang lalu Ms_Mea said…
XD niice...I'll call you cuz :)
I don't know who the heck the guys are, so I can't give an opinion. Oh well...Are they cute? :P Wow, I sound like Bella lol

hampir setahun yang lalu DracoLuver said…
Well, I like Daniel Radcliffe and Justin Bieber, but I don't know if you find them attractive or not.:))

hampir setahun yang lalu Ms_Mea said…
Oh, I know who they are now :P
(Yeah, I lied about going to bed)
Meh, I'm not a fan of Bieber, and Dan's ok...

hampir setahun yang lalu harrypotterbest said…
Well, since everyone seems to be going to bed, guess I'll do that too... Night guys!

hampir setahun yang lalu DracoLuver said…
I probably have said this many times on this spot, but watch this video, it's brill.!:

*blushes* I'm not married to him ... yet. *smiles while looking down*

Btw, what's our family name? I suggest the Antis.
Previous
Something to say? Sign in with one of these options:
Log in to Fanpop! Not yet registered? Create a new Fanpop account!