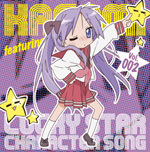 Kagami is the older fraternal twin sister of Tsukasa. In school, her grades are excellent and she studies very hard. She was even the class president of her class in her first year. She is in a different class than Konata and Tsukasa, but she frequently comes to their class during lunch time to eat with them. Additionally, Kagami chose the humanities course in her saat tahun so that she could be with her friends, but she was the only one separated into a different classroom; the same occurred in her third year. Kagami, seldom referred to as "Kagamin", is a bit egotistic, but is somewhat weak in cooking.

Kagami's physique is average. She has long light purple hair, and wears a ribbon tied into pig-tails, and her sharp eyes are light violet. Kagami is the stereotypical "tsukkomi" character, however, she is prone to become shy at times, hence being a tsundere character as well.

Much like Konata, Kagami likes video games, but plays a different genre than Konata: Kagami likes to play scrolling shooters. She loves to read light novels, but she is lonely that no one around her has the same interest as her.
RuvyGrace likes this
More Cards
1234567891011