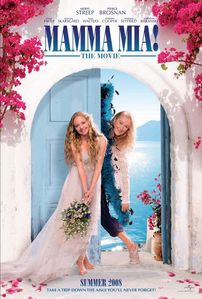 Sophie and her mother.
Hi everyone, 8 years ago, I watched the movie version and even wrote an artikel comparing both the movie and the stage version. So, here is my review on the movie itself.

I had always wanted to go to Greece, the scenery is breathtakingly pretty! I can't imagine how the filmmakers themselves did it, but I must give them credits for the lovely location.

I was actually amaze with the casts, especially Meryll Streep and Amanda Seyfried that they could actually sing. I Cinta Streep's version of the Winner Takes it All in which she nails it, until the ending in which I was expecting...
continue reading...
Mamma Mia: Stage vs Film
posted by deedragongirl

The stage settings were really amazing and extraordinary unusual. I was glad that many of ABBA's popular songs, like 'Knowing Me, Knowing You' and 'Mamma Mia' are featured in the stage version and they fit the story perfectly at the right timing. The moment was 'The Winner Takes it All', and it was when Donna sang the last note especially.
But the best for me was...
continue reading...
1
Mamma Mia! Here We Go Again Review
posted by deedragongirl 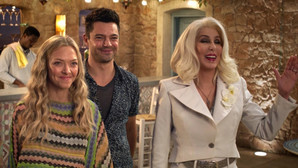 What a surprise Cher!
Hi guys, I managed to watch the movie this morning and once again, I was blewn away sejak the film and here is my review on the film.

So, the story is basically taking place 8 years after the events of the first film that came out a decade ago. Sadly to say, Donna has passed away prior to the events of this film and Sophie opens up a hotel and in honour of her mother. She names the hotel after her!
Interestingly, the film also sets as a prequel because the majority of the film are shown in flashback menunjukkan a young Donna in 1979 and how she meets Sam, Harry and Bill. In an ironic twist,...
continue reading...
Why I Am Excited for Mamma Mia: Here We Go Again?
posted by deedragongirl

Sky and Sophie, so good to see you again!
Hi guys, as anda know, the sequel is coming out this year. Marking 10 years after the original one came out. So, here are my reasons why I'm all excited for the sequel.

I'm excited that lebih of their popular songs are going to play in this sequel, from what I had read, the songs from the Broadway Musical that did not make it to the first film will find it's way in this sequel. Wonder which scenes will they play?

I first saw her in Downton Abbey and Disney's Cinderella, I was blown away sejak her Singing in the latter with her rendition of 'A Dream Is Your hati, tengah-tengah Makes'...
continue reading...
More Cards
1234567891011