Tony choice between Stephanie and Annette
posted by boytoy_84 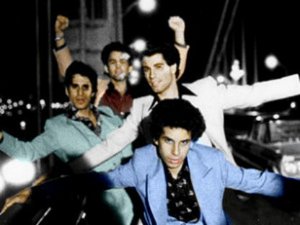 The gang
As a great actor John Travolta is and he's one of my absolute kegemaran actors. There's some things about Tony that I dislike about him and some good points about him.

Most throughout the film, he's not bad and I Amire him, but some scenes that involve Annette, I feel he's not nice and the way he treats her. In the beginning of the film of Annette's first appearance, Tony talks so selfish to her sejak telling her that she's "not his dream girl" after they danced, Tony sits back down with his Friends and leaving Annette standing and not menunjukkan any generous manner to let her sit with him. He tells her to sit down sejak herself and she jokingly tells him that she'd lay down and he tells her that she wouldn't. Shortly we see Joey pulling out a chair for a woman he danced with, which shows that Joey is lebih on a generous side than Tony. As Tony goes to the bar were a stripper named Penny strips off her clothes Tony watches her at the bar as he orders his Seven and Seven drink. Annette goes to sit with him and tells him about a dancing competition coming up and tells him that they dated but Tony tells her "only once, once was enough" menunjukkan that he doesn't care to be with her and hoping to find someone else as his partner.

Joey come walking in with a woman and complains to Tony about Double J taking too long in the car while having sex with a woman. Outside the club, Joey asks about Annette if Tony ever gonna put out with her and Tony doubts it. It's menunjukkan that Tony has no part of Annette when it comes to sex and that Joey wants to put out with Annette but he figures that Annette is involved with Tony in the meantime. (I feel that Joey should of been with Annette in the first place plus, I never cared about Tony with Annette. they don't really fit as a couple where Joey and Annette do).
Tony meets Stephanie, she acts rude and rejects him but then the saat time they meet again, she agrees to have lunch with Tony. All she she tells him that she meets this guy and another guy from work and so on. Tony as he eats, he takes big bites and eats with his mouth open. (with a woman, he should eat with his mouth closed. I cringe when he eats in that scene).

When Annette waited for Tony outside of the dance studio, he tells her that they're no longer partners and met someone else, which made Annette heartbroken and she feels that Tony hates her as he tells her "give me a break." (Annette needs to give him up and be with someone else like Joey)

At the club, Annette brags Tony to make it with her, he still brushes it off and refuses to. She tells Tony that she'll make it with ether Joey atau Double J making Tony envy, Tony then agrees. As they're in the car, Tony asks her is she's protected (why worry about her, what about you, Tony? Afraid to use a rubber atau something? It's believed that he dry-hump and no intercourse on the selamat, peti deposit keselamatan side)

seterusnya day, Tony bitched at Stephanie about not being at the club last night, where Stephanie told that she berkata "maybe" Meaning that she might of went to the club if desired to. (I feel Tony has to control everybody and that he shouldn't).

At the White Castle, Tony again eats with his mouth open were disgusted Joey tells him if he ever chews with mouth closed. Tony tells him that if his mother dies then he will. So, Joey and Double J pick on Tony sejak barking like dogs. (Tony just doesn't know manners)

Tony asks Mr. Fusco for a hari off to help Stephanie alih her stuff in a new apartment in Manhattan. Mr. Fusco says he can't Because some of the employees were out sick but Tony tells Mr. Fusco he going to take it off forcing Mr. Fusco to api, kebakaran him. Tony tells him "F*** U!" and storms off. (So disrespectful)

Tony borrows Bobby's car and Bobby wonders if Tony is going to call him tonight. Tony just leaves without saying anything leaving Bobby worried. (All Tony cared about is himself and Stephanie)

When Tony helps Stephanie bringing her things in. He thinks the guy who lives with Stephanie is someone she puts out with and Tony feeling envy of it. Stephanie tells him that the guy is just a friend and nothing else. (Chill out Tony he is only a friend to her)

When Stephanie does a little dance with Pete, Tony thinks Pete wants a piece of her and tells him "what are anda doing? Trying to get 50%? " (Tony acts very controlling and has to have everything his way)
Now at the club the competition when Tony dances with Stephanie, Annette asks Joey for lebih speed pills, Joey feels Annette had enough but generous enough to give her more. (Annette is feeling angry and heartbroken so she turns to Joey to get a little piece with him)

When Tony won the 1st prize, he blames his Friends for the contest Supposably rigged. Storms out with Stephanie and cussing till he got to the car. (Tony got on my nerves there. He's lucky that he won 1st prize and should appreciate it. He needs to stop Berlakon like a baby)
Tony and Stephanie got in the car were Tony tries making out with Stephanie and Stephanie tries getting him off of her. Tony complains to her why she's hanging with him. She tries to explain but Tony pins her down on the kerusi, tempat duduk and forces Stephanie to have sex with him. Stephanie was close of getting raped sejak Tony and escapes out of the car. (Tony doesn't treat women too good sejak forcing them to put out with him)

Tony's Friends came out of the club intoxicated and high from speed. Annette decides to have intercourse with Joey (before she was high when asked for speed) and Double J. Tony refuses her not to and grabs her away from Joey as she and Joey are making out. Causing a slight fight and argument, Joey tells him off "you don't give a shit about her!" (I don't blame Joey and Joey is right about Tony treating Annette like crap. Joey and Annette should be together) in the car Joey and Annette have sex and with no protection, Annette stops Joey and she becomes raped sejak Double J sejak his confusion off screen when it was his turn. (Annette wanted Joey but sejak taking too many speed and gotten high which got her to get Double J involved accidentally If she gotten pregnant, Joey has the higher chance of impregnating Annette since he didn't use a rubber and busted a nut sejak all his moaning and had lebih time in the backseat. Double J lebih likely only had a minit atau two before stopping at the bridge)

Tony calls Annette a "cunt" and hurting her feelings, Annette runs out of the car and wanted to jump off the bridge. So Tony didn't have a choice but to apologize to her for the way he treated her. As she was so angry with Tony and herself. (So this was all because of Tony that Annette did what she did. I can understand her sejak seeing Tony with Stephanie together and the Ciuman they had before finishing their dance. She felt that she should be there with Tony dancing and winning the prize. But it's best if she wasn't with Tony and Joey gets the chance to have her. Since they look better as a couple)

Tony tries helping Bobby C off the bridge but Bobby cries and blames Tony for not calling him and the crisis he has with Pauline, his unseen pregnant girlfriend. Bobby falls off the bridge accidentally and Tony feeling guilty about not helping Bobby.
(Tony should pay lebih attention to Bobby and help him. Tony is all about Stephanie. It shows that I'm not a big peminat of Tony but a peminat of his actor, John)

His good points: He sticks up for his brother and argues at his mother at makan malam, majlis makan malam about his brother not wanting to be a priest anymore.

He's an excellent dancer and was nice enough to have a little dance with Doreen who's obsessed with his dancing.

He brings Stephanie to a park were they see the Verazzano Narrows bridge close sejak and sat at a bench and talked about the bridge as Stephanie gives Tony a Ciuman on the cheek.

He has a dance with Connie, a young woman who asks him if he's good in katil as he's on the dance floor.

He goes to Stephanie's apartment and apologize to her for what he did last night and telling Stephanie that he might find a apartment in Manhattan and stay Friends with Stephanie. 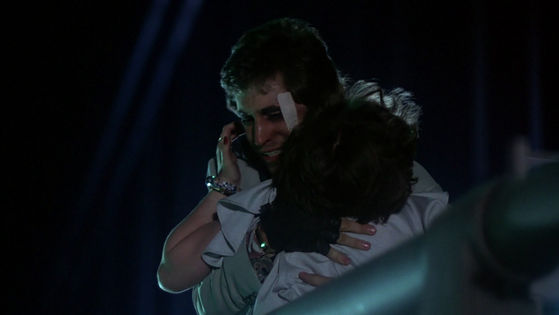 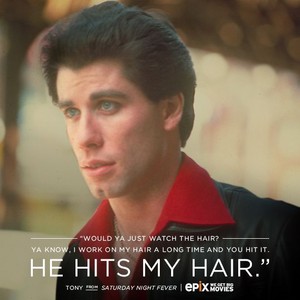 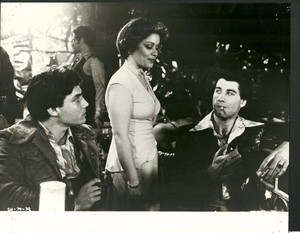 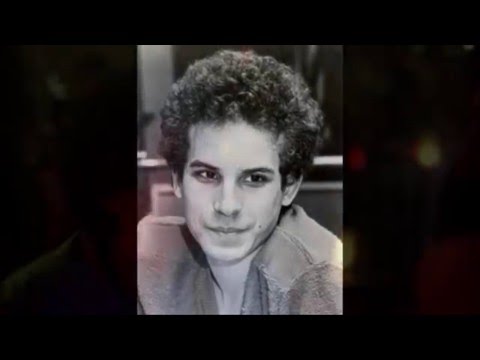 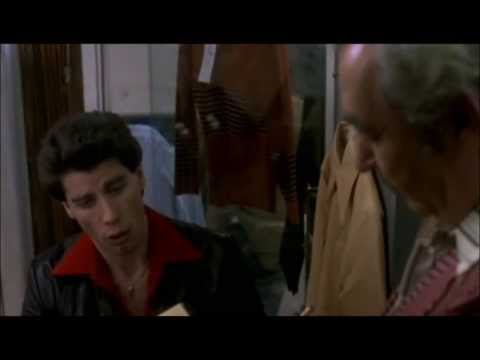 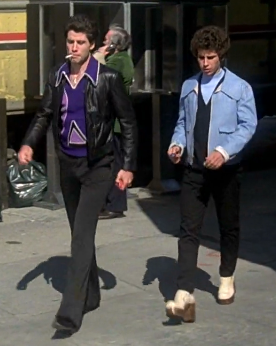 2
Bobby falls to his death
added by boytoy_84 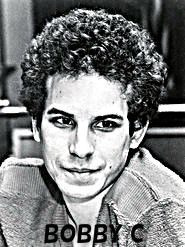 This is some of Bobby's background during the film,
suppose of what Bobby C has in his mind,

We start off with him being a sweet mousy go along guy who has this girlfriend Pauline who is probably a girl like Annette trolling the discos looking to find a husband. Unlike Tony, who is on to girls like that, Bobby C is naive. The first thing we see is him asking If anyone has seen Pauline. But still waters run deep. We also see he likes to sit quietly and take pills/,drugs. But drugs for mental illness atau social drugs? But, at the beginning he's also kind to women because...
continue reading...

At the dance studio, Pete teaching several people to dance.

Tony walks to the entrance to ask Pete about Stephanie.

Tony: Pete, she come in?

Pete: I told anda on the phone, she comes in on Tuesday.

Tony: I know. So, did she come in atau what?

Pete: And what is it today, huh? 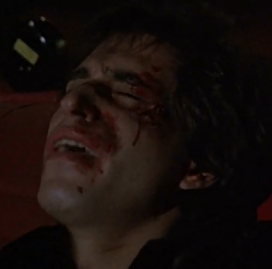 1. A woman agree to dance on the stage for Tony, as she dances, she strips her clothes off, revealing her breasts. She also shakes her bare buttocks. She is shown twice in the film.

3. Tony and his former dance partner have sex. He tells her...
continue reading...
1
Saturday Night Fever glossary
posted by boytoy_84 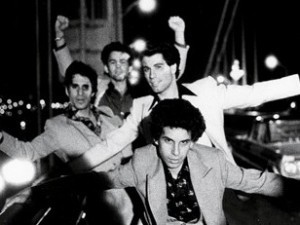 Tony, Joey, Bobby C and Double J
2001 Odyssey: A discotheque club were Tony and his Friends all hang out every Saturday night. The building is an actual night club from the 70's which was demolished in 2005.

Al Pacino: An actor that a drunk woman called Tony when he kisses her and Tony has a poster of him from the 1973 film, Serpico and walks out of this room wearing only his black underwear and chanting Al Pacino in front of his grandmother who covers her face when he walked out.

Annette: Tony's former dance partner, who became rejected sejak him for another woman. Annette instead searches for someone who's lebih caring and willing...
continue reading... 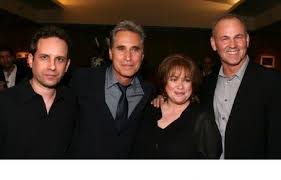 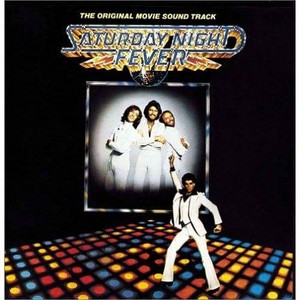 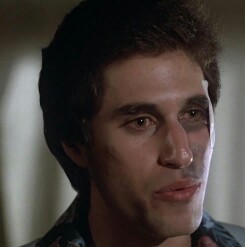 Tony and Joey
Here are the songs from the beginning to the end of the film.

2. Night Fever: Tony fixing himself up to go to 2001 Odyssey disco club.

3. Doctor Disco: "The Faces" head to the club before getting out of the car.

4. A Fifth Of Beethoven: Tony and "The Faces" enter the club.

6. Salsation: Tony sees Stephanie for the first time and Tony asks Joey if he knows her.

7. If I can't have you: Tony in the stage room with Annette and Double J scores in the car.

8. Night Fever: Tony and his Friends (Except Bobby C) dance along with other...
continue reading... 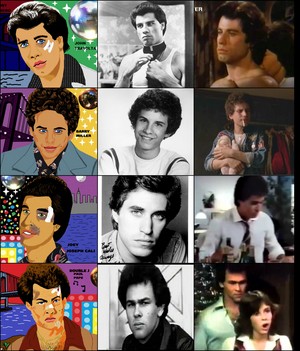