Why?
posted by blazeroxs
"Come on, Blaze. Please. Give me a chance." Sonic pleaded.
"For the last time Sonic, no." Blaze berkata turning around and walking away.
Sonic kept on following her, "Give me one good reason why anda don't want to go out with me." he finished putting a finger in the air.
Blaze cleared her throat, "Ok first of all anda always ask every girl anda know, besides Amy since she asks you. anda flirt every girl anda know, anda then make up with them, and-"
"OK, ok I see your point." Sonic cut her off, "But you're different. anda don't chase me around, anda don't try to kill me with a hammer, anda don't tunjuk off, and a whole bunch of stuff. I mean sure anda sometimes have an attitude..." Sonic looked at Blaze to see that she has her annoyed face, "No offense." he quickly corrected himself, Blaze shrugged, "And well... I never liked a girl as much as you."
Blaze slightly blushed when he finished that last sentence and looked away. Sonic smirked when he saw that she was, “What do ya say?”
Blaze sighed and smiled, “There anda go again.”
Sonic’s smirk disappeared and exchanged it with a confused face. “You don’t believe me? After all I just berkata anda still don’t-”
“I’m not saying I don’t, I’m just not convinced that you’re telling the truth. I bet that’s the same thing anda berkata to those other girls before I came.” Blaze explained.
“Maybe…” Sonic berkata scratching his head, “but that was the past. This is now.”
“So I’m right?”
“About what?”
“Aren’t anda listening to what I’m saying? That anda did-”
“Yes I know what anda meant, but aren’t anda listening to what I’m saying? I did do that. In the past.” Sonic explained. “I’ll admit it, sometimes I regret doing it.”
“Sometimes?” Blaze repeated what he said, putting her hands on her hips.
“Yeah sometimes, ‘cause some of the girls I dated I actually cared about. Eventually we broke up and… well that’s pretty much it.” He finished.
“So what about those other girls anda went out with, but didn’t really care about them?” Blaze asked.
Sonic shrugged, “I don’t know, I was board then anda came along.”
Blaze again blushed slightly, but not as much as she did the first time, then twitched a small smile.
Sonic smiled as well, “But I’m telling the truth now, about how I feel about you. I want to be with you, get to know anda better, and I promise I’ll try not to hurt you. If I do then anda can leave without telling me a reason why, but I probably will.” He finished.
Blaze stood there now with her arms crossed on her chest. She opened her mouth to say something, but was cut off.
“And to prove that I do,” Sonic berkata as he ran behind her putting his hands on her shoulders, Blaze still stood there not moving, “I didn’t say this to any of the girls I dated, but I had a feeling that anda might be the one I was looking for all this time. I Cinta you.” He whispered in her ear.
Blaze didn’t move, not even a flinch came out of her. Sonic stood behind with his hands still on her shoulder, waiting for an answer. There was a moment of silence when Blaze sighed causing Sonic to jump. She turned around to see his face, “I never thought anda would ever feel that about me, Sonic. I always thought anda considered me as a friend with a nasty attitude.” Blaze berkata smiling, “Now allow me to express how I feel about you. I Cinta the way anda listen to me, Cinta the way anda never made fun of me, Cinta the way anda never even tried to hurt me.” Blaze explained, “But the most thing I Cinta is anda helped me. I Cinta anda too.” She finished.
Before Sonic could say anything he found Blaze leaning ke hadapan with her eyes closed. He put his finger on her lips, “If anda loved me, how come anda kept saying no?”
Blaze opened her eyes and pushed his finger off her lips, “Because like I said, I wasn’t convinced that anda were telling the truth. I thought that anda thought that I was one of those girls anda didn’t care about and just wanted to tarikh them.” Blaze explained.
“Well now ya know.” He berkata with a smirk.
“Yes I do. Now where was I?” she berkata putting a finger on her chin while her other hand was on his chest.
Sonic wrapped his arms around her waist, bringing her closer to him, “Oh allow me princess.” He berkata putting his lips with hers. Both kissed passionately as the saat went. Blaze pulled off from each others grip and sighed then, putting their foreheads together and stayed like that for a minute.
"Thank you." Blaze said, "Thank anda for being there for me all time."
"I'm gonna be here for a while, Blaze." he replied. "Now let's go somewhere." he berkata leading Blaze to a direction.
"Alright." she said.
They both walked away tell there was no road.
blazeroxs aw crap what a suckish ending i couldnt come up with one so ma bad

6
Sonic and Blaze have a baby
added by blazeroxs 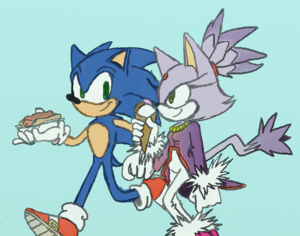 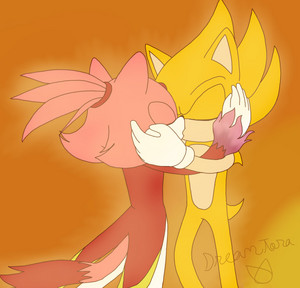 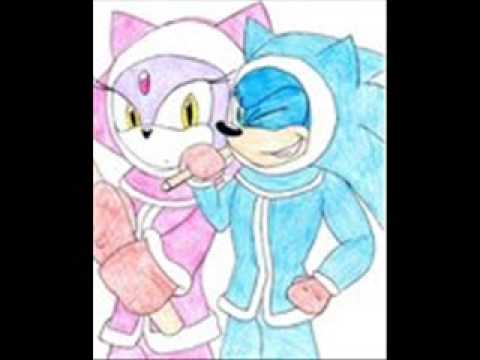 Cosmic Eternity
added by Vela-Nova
Source: People on deviantart
Where do anda think? part 1
posted by COFblaze
Chapter One: Blaze's Palace, it begins


"Your highness, anda have a visitor."

Blaze the Cat finished putting on her makeup and turned around to face her servant, "Who is it?"

"It's Silver the Hedgehog your highness."

"Let him in please."

"Yes your highness." The servant bowed and made her way out, Blaze rolled her eyes, she couldn't stand everyone calling her "highness", but, being a princess did have it's perks. She looked around at her massive room and Queen sized bed, it was all purple of course.

"Blaze!" The familiar voice came from the door, and Silver ran towards her with his arms out, however....
continue reading... 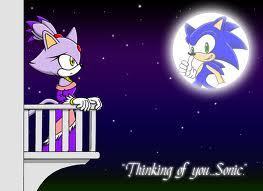