What kind of relationship do anda think was between pink, yellow, and blue diamond?

I thought there was a Cinta segitiga, segi tiga between them. merah jambu and blue diamond were together and yellow was jealous and shattered merah jambu so she can be with blue is why she was trying to get her to forget about pink. but after seeing " Jungle Moon" after the way merah jambu might have acted portrayed sejak Stevonnie, I think a maybe they could've had a mother-daughter relationship. what do anda think? 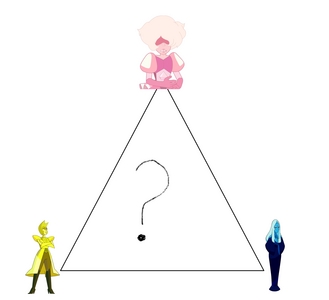