I know this fan-art sucks but it's the only one I could find that features both of them.
Well,this has been a long time coming.
Due to how much people liked my "Similarities between Frozen and Steven Universe" article,I decided to make similar one to it.But this time,I'll senarai off the similarities between two of my kegemaran series of all time,Samurai Jack and Berserk.
Now before we get into the artikel itself,let's get some things out of the way.
anda see,when I was a little boy,Samurai Jack was my kegemaran tunjuk growing up and now that I'm older,I honestly think it got better with time and right now it's my saat kegemaran cartoon of all time.

I got introduced to Berserk when I...
continue reading...
El Noire's Anime Talk: My Hero Academia
posted by El_Noire
Hi, El_Noire here! With the first two episodes of the popular Manga Series Boku No Hero Academia, atau My Hero Academia, being released, many Anime peminat-peminat have been wondering if all the hype surrounding the series is warranted, if they should even bother with it. As a follower of the Manga since chapter 1 i am very bias, i'll be honest, but i truly believe that yes, yes anda should.

Now, anda may be wondering, "What exactly IS My Hero Academia?" I can give anda that and a can of pop, but i think a quick summary should work.

The story follows a young man sejak the name of Izuku Midoriya, a boy born without...
continue reading...
3
My bahagian, atas ten most hated characters with reasoning
posted by sachimochi 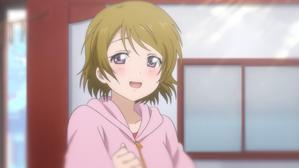 Hi people, I decided to write about my most hated characters in anime. Take the tinjauan here: link. Don't make a big fuss if I hate one of your kegemaran characters because it's only my opinion. Also, I live in China, so don't expect my grammar to be correct all the time.

10. Hanayo Koizumi: SHE HAS THE WORST VOICE IN μ's!!! I find her to be really annoying. Some people may think Nico is the annoying one, but she really isn't. She's just cute and stubborn:3

9. Satsuki Kiryuin: I used to like her because I thought she was pretty and confident, so practically she was an idol to me. As a result, she...
continue reading...
3
Who Are anda Calling Short?! (Edward Elric x Reader) One-shot
posted by SparklyNeko
“I can’t believe you’ve never been to a fair, Edward,” anda said, jokingly punching the boy in the arm as the two of anda approached the booth to get your wristbands. anda were going to get the twenty dollar ones so anda could ride everything without having to use tickets.


“Ow, couldn’t anda have at least punched my other arm?” He said, holding his left arm with a scrunched up face, still feeling the pain from where anda punched it. anda giggled. He had fought so many bad guys without one complaint about hurting, but anda punch him once and he acts like he’s dying from the pain.


“I...
continue reading...
14
How I make an ikon
posted by kakukun
hei there! ~ I decided to make this step sejak step artikel on how I make an ikon just because I felt bad because I couldn't include some people's entries in the tinjauan-tinjauan of the Anime ikon Contest because they don't follow the rules given. I'm not really sure where to put this, but since the Anime ikon Contest is here, I decided to post it in this spot.

Making ikon-ikon are really easy. In fact, anda don't really need a fancy software to make one. anda could just always crop a picture and re-size it on your computer. If anda want to add some fancy effects, anda could always use a foto editing software or...
continue reading...
November 2021 Releases - MEDIA BLASTERS ANNOUNCES
posted by ForestGWolfy